Zippers is a tradition when it comes to hot male dancers in Dallas, TX. Eye candy at its finest can often be found in this small neighborhood bar. I have visited there several times and have always left with something, or “someone” worth talking about. This visit was no exception. We entered the bar on a recent Friday night. There was no cover. Immediately to our right was a muscled dancer on a corner stage. Looking straight ahead is a long narrow room with a bar down the middle. There are stools around the bar where the patrons sit. At the end of the bar on the right is another corner stage. This one was occupied by two extremely cute dancers with slim defined bodies.

I ordered a Dos Equis lager from the bartender. The price was $5 and I threw in a $1 tip. We found a seat at the long bar. I sipped the beer as I took in the scenery. There is a wide doorway at the end of the bar that leads to a small room with a stage on the left that wraps around to the back wall. There were two dancers on this stage as well. The first one on the left was wearing a pair of long white shorts. At first I thought this was a little unusual for a stripper. I mean, male strippers usually wear something a little more revealing. It soon became apparent why it was necessary for him to wear the long shorts. Briefs or even regular boxers would not have been long enough to cover what he had been blessed with.

The second dancer in the room was Cory. Cory was our favorite dancer of the night. Great body, dark hair, handsome face, perfect ass, and a sexy smile. All of that was seductively wrapped inside red bikini briefs with string sides. I must admit that from that point on I spent most of my time watching Cory and little else. A couple of times Cory made eye contact and smiled. After his session he made his way around the room and stopped by where I was sitting. I almost forgot to tip, I was enjoying the view. I also liked Cory because he knows the game. He was entertaining, sexy, and a prime example of the reason we male stripper fans go to bars like Zippers. There was another bar in a back room past the stage where Cory was dancing. We walked back and looked in but didn't stay. I already knew who I wanted to watch.

I would like to commend Zippers for the music they played at the bar. We have been to bars where the DJ would select music that they may have personally liked but the dancers could not dance to it. The music at Zippers helped create the atmosphere and encourage the dancers to move the way we like to see them move.

Zippers is a regular stop when we make a trip to Dallas and will remain so. Each time we have visited, the dancers have been different but each time there has always been one or more that we remember and hope to see again. If you are visiting Dallas make Zippers one of your stops. We recommend that you go early. Parking is limited in the area. There are other bars in the same area so once you've parked, you can move back and forth and enjoy them all. Until next time, stop in at Zippers and find something you want to talk about. Leave a comment at the end of the blog or email me and let me know who was your favorite male dancer.

Posted by Mike at 9:08 AM No comments: Links to this post

Hot dancers and a friendly, fun crowd is what you will find at The Tin Room in Dallas, TX. The patrons were a wide-range of ages comprised mostly of men with a few women mixed in. I arrived early in the afternoon on Sunday for reasons I'll explain later. There was no cover for the time I arrived. I sat at the bar and was warmly greeted by Steven, a super nice guy and a great bartender. I ordered a beer and watched a little football on the screen at the bar. (The Dallas Cowboys were playing of course.) I was pleased to discover that the beer and a Jack and Coke that I had later were both priced lower than I have found at many other locations.

Steven and I chatted for a while and he filled me in on the bar, the dancers, etc. He explained that several of the dancers were at the moment riding on the Pride parade float but would be returning soon. This was not a problem because I turned around to see a dancer named Charlie had already stepped up to a small stage in the middle of the bar. Charlie is a very handsome black guy with a compact, defined body. He speaks volumes with his eyes and has a great smile. So, it wasn't long before I made my way to the little stage and placed a tip in his "fit-just-right-in-all-the-right-places" shorts. He said, "thank you" and I returned to my seat and watched him dance a while. After a few songs and a few tips from other patrons Charlie made his way around the bar and received several more tips. I added a few more dollars myself. I mean, when Charlie flashes that smile of his, well, you just can't help it. If Charlie had been the only dancer for the night, I could have left perfectly content.

But, Charlie was not the only dancer. There were a total of seven different dancers that appeared during my time at The Tin Room. Most were in their early to mid-20s, fit or defined, and cute as hell. They danced on boxes, small stages, at a pole, and in various places around the bar. You could sit in any location and watch a dancer without any obstructions. They were all very friendly while dancing and when making their way around the room.

At one point the dancers from the Pride parade float all came in dressed in small, red briefs with the bar's name across the back. There were almost more dancers than customers at the bar.

Several of the arriving dancers took turns in the shower stage cooling down and washing up before going out to eat. They wore their shorts in the shower but I have no complaints. Wet underwear can sometimes be even more sexy than letting it all hang out. Dropping by on this particular afternoon well, I'll call that good timing on my part.

Sometime during my interaction with Charlie, a regular at the bar named Jack took a seat beside me. Jack, or "The Jack" is well-known by many of the staff and customers and turned out to be a colorful character and one of the friendliest people I have ever met. I wound up sitting with him the rest of my visit. If you read this Jack, thanks for helping us have a great time!

The bar is a no smoking facility but has a patio area in the back where you are allowed to smoke. The patio has sunny areas and shaded covered areas so it is comfortable in any type of weather. It is quiet there as well and I stepped to the patio to speak on the phone a couple of times.

I chose to visit The Tin Room on Sunday afternoon as an alternative to fighting the crowds who were lined up for the Pride Parade. Also, I had tried to visit The Tin Room on Friday and Saturday nights but it was so busy that parking was almost non-existent unless you wanted to walk several blocks or take a cab. This is not the case all the time although the bar is a popular location, they do have a parking lot and you can park along the street. I recommend that you go a little early and get a parking space in front of the bar, or in front of the business next door (after 6:00 p.m. only). Regardless of where you park, it is worth a visit if you are in the Dallas area.

The owners of The Tin Room also have a location on Cedar Springs called Drama. I am already planning another trip to Dallas and I will definitely be going to The Tin Room. This time I want to drop by on a Friday or Saturday night. Wait a minute...maybe I'll drop by both nights!!! I hope to visit Drama as well. Until next time... tip the boys a dollar for me!!!

Photos by: Michael Jon Preng, and Chuck Marcelo Dube from the Tin Room website and Facebook page.
Posted by Mike at 10:29 AM No comments: Links to this post 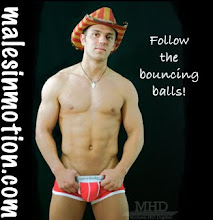